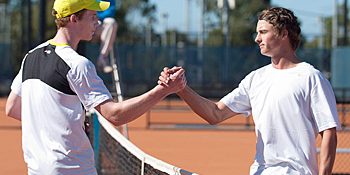 At one stage during the match, Jake Delaney’s Gallipoli Youth Tennis Cup title bid looked dead and buried after Clissold clinched the first set and earned himself three match points in the 10th game of the second set on 16-year-old Delaney’s serve.

Delaney saved the first two, then another two points later, before holding for five-all. After saving three match points, Delaney was never in danger again, benefitting from a loose Clissold service game to go a break up before levelling the match at a set apiece.

Delaney did not lose more than one point in any of his four service games in the third set by taking it 6-3 and winning the boys’ title at the Gallipoli Youth Cup.

He returned to the court about an hour later to partner his 15-year-old brother Jesse to the doubles title, 6-2 6-3 over Michael Commings and Richard Yang.

The girls’ title was won by Violet Apisah. The wildcard entrant defeated No. 5 seed and fellow 14-year-old Jaimee Fourlis to claim her maiden ITF junior title at her second attempt, a week after making the quarter-finals on debut as a qualifier.

Apisah competes for her adopted country, but naturally retains a soft spot for her country of origin. She grew up in a Papua New Guinea village and did not move to Australia until six years ago.

Throughout the tournament hundreds of Year 6 students from various schools around Victoria participated in a range of tennis activities and education programs as part of the School Commemoration Program in association with the Victorian RSL.