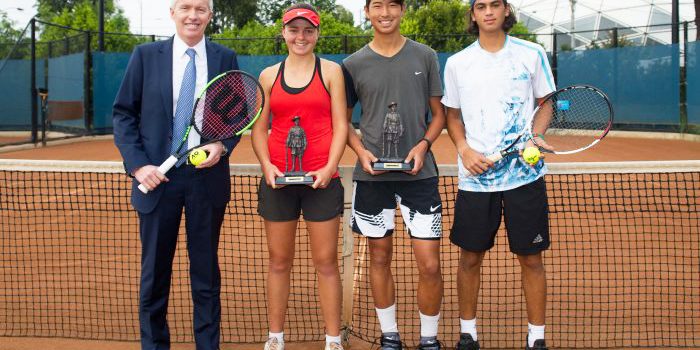 The Gallipoli Youth Cup is celebrating its 10th anniversary edition at Melbourne Park this week.

The world’s only international junior tennis tournament held in commemoration of the soldiers who lost their lives at Gallipoli, the Gallipoli Youth Cup will this year feature players from Australia, New Zealand, Great Britain, Germany, Indonesia, Singapore, China and Japan.

Australians Chase Ferguson (Vic) and Lisa Mays (NSW) are the respective top seeds in the boys’ and girls’ competitions, which will feature up to 120 local and international junior players.

Since its inception in 2008, more than 1,000 players representing 30 nations have participated in the Gallipoli Youth Cup, which concludes this Friday.

The five-day tournament is run in conjunction with the School Education Program (formerly the School Commemoration Program), which aims to educate year six students about the events at Gallipoli, the benefits of maintaining a healthy lifestyle through tennis and the values of camaraderie.

Since 2008, the School Education Program has educated approximately 7,000 primary school children about the Gallipoli campaign. This year, the Victorian Government will again provide educational booklets about the First World War.

To date, 25 primary schools from across Victoria have taken part in the program, which for the first time this year will be replicated in Queensland at Pat Rafter Arena, host venue for the recent Davis Cup tie between Australia and the United States.

“We would like to congratulate the Gallipoli Youth Cup for reaching its tenth anniversary this year,” Tennis Australia CEO Craig Tiley said.

“Over the past decade, the tournament and the School Education Program have played an important role in teaching young children about the sacrifices our soldiers made during the Gallipoli campaign. The Gallipoli Youth Cup’s Director, Umit Oraloglu, has been the driving force behind the project, so we commend him for his determination to grow a tournament which continues to go from strength to strength.”

The School Education Program is arranged in conjunction with RSL Victoria, who assist in organising and presenting the education component of the project. This year, the program will host up to 500 year six students from across the state of Victoria.

“Since the program began, the Victorian Branch of the RSL has provided support and educational presentations for the participating children, emphasising the close links between the former foes and now friends and allies, Turkey and Australia,” RSL Victoria CEO Michael Annett said.

The Gallipoli Youth Cup and School Education Program both form part of the Australian Tennis Foundation. The project, run in partnership with Tennis Australia, is the brainchild of Umit Oraloglu and Australian tennis legend and tournament ambassador, Pat Cash.

“It’s testament to all our partners that we have reached this special milestone and to expand the School Education Program into Queensland. Hopefully in the near future we can introduce this program to every other state in Australia,” Oraloglu said.

“With the help of Tennis Australia and RSL Victoria, we have not only been giving young tennis players the chance to play in an international competition, but have also educated Australian school children about our history, which is something I’m very proud of,” Cash said.

The tournament brings together the Australian and Turkish communities by honouring the service and sacrifice of the soldiers from both nations who served at Gallipoli. This year Cihan Akay (Vic), born in Australia of Turkish descent, will embody the unifying spirit of the Gallipoli Youth Cup.

“It’s game, set and match to the unique friendship which already exists between the Turks and the Australians, and which continues on the tennis courts,” Ambassador of Turkey and Patron of the Gallipoli Youth Cup, His Excellency Vakur Gokdenizler said.

The singles and doubles winners will receive a limited edition figurine containing authentic sand from Gallipoli, in Turkey. These items have been kindly donated by Military Shop, the official suppliers of the Gallipoli Youth Cup.