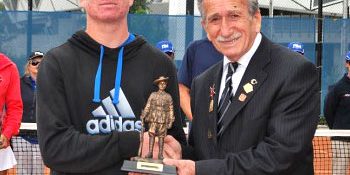 Vukic looked to continue his seven match winning streak winning the first set before Pritchard, the world No.227 junior, clawed back to take honours, 4-6 6-2 6-2.

Pritchard looked strong all week only dropping two out of twelve sets for the week.

Vukic also excelled on the clay at Melbourne Park, defeating the No.2 seed and 2013 Victorian Clay Court champion Daniel Guccione (Bundoora, Vic) before out-powering No.4 seed Olly Sadler (NZL) in the semifinals.

It was a gallant effort for Mendez, who just two weeks ago helped Australia qualify for the under 14s World Junior Tennis Finals in August at the Asia/Oceania qualifying event in Kuching, Malaysia.

Soylu made it two from two when she paired up with teammate Muge Topsel to win the girls’ doubles title over Anja Dokic and Zoe Hives (Ballarat, Vic), 6-2 6-4.

The boys’ doubles title was won by Yuya Ito from Japan and Kurtis Wilson from South Australia over Pritchard and Vukic, 6-4 6-4.

In its sixth year, the tournament gives rising stars from Australia and around the world the opportunity to commemorate the fallen soldiers at Gallipoli. This year competitors from Istanbul, Turkey competed in the event.

Throughout the tournament hundreds of Year 6 students from various schools around Victoria participated in a range of tennis activities and education programs as part of the School Commemoration Program in association with the Victorian RSL.