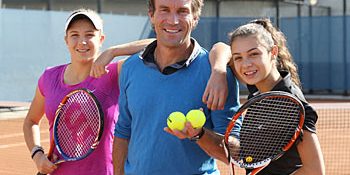 Providing players with an international competitive opportunity while at the same time helping them connect with and honour the ANZAC spirit, the Gallipoli Youth Cup will next week return to Melbourne for the first time since 2009.

Now in it’s sixth year, the Gallipoli Youth Cup was established thanks to the vision of Aussie tennis legend Pat Cash and his friend Umit Oraloglu, a Turkish Australian.

It aims to allow players the chance to commemorate the fallen soldiers at Gallipoli through sporting competition and participation, and unite young players from different national and cultural backgrounds in an historical context.

Cash, who flew in from his base in London to attend Friday’s media event at Melbourne Park, said he had always loved history when growing up, and was thrilled that the tournament was keeping the memory of World War I and the ANZACs alive.

“As far as I know, there’s never been any sporting event put together for the ANZAC nations or World War I. We have sporting events on ANZAC Day, but our idea was to get the nations together,” he explained.

“Australia is a country that’s open to everybody, and we’re all from somewhere. We wanted to create and continue this tradition and have recognition of that.”

One of the tournament’s main goals is to strengthen ties between Australia and Turkey nations, and it’s definitely achieving its aim in 2013, with a large Turkish contingent set to grace the clay at Melbourne Park.

The girls’ event is headed by top seed Ipek Soylu, from Adana, Turkey and currently the world’s 16th-ranked junior.

Another player in the draw is Sera Yavuzcan, a 16-year-old Australian of Turkish descent and playing in her first ever ITF event.

“(The goal is) definitely to get experience. Because it’s my first ITF tournament I’m not planning to go too well, so if I do win or I do get games, it will definitely be a bonus.”

Coming in behind Soylu is second seed Zoe Hives, the Victorian player who recently won the 16s National Claycourt Championships at the very same Melbourne venue. The boys draw is headed by top seed New South Wales’ Mitchell Pritchard and No.2 seed Daniel Guccione of Victoria.

Perez was on hand at Friday’s media event alongside Cash and Yavuzcan, and said the Gallipoli Youth Cup was an event she was very keen to be involved with.

“Obviously it’s a great tournament,” she said. “It’s really good being able to play against all the Turkish players and players from other countries, and it’s a good friendship to have with the other players here.”

The Gallipoli Youth Cup will kick off on Monday 22 April, beginning with two days of qualifying before the main draw action gets underway on Wednesday.

Cash said it was an important stepping stone in the careers of those playing this week at Melbourne Park.

“These are the kinds of events that myself and every player you see today on the world tour have started at and worked their way through,” he said.

“These events are absolutely crucial for these young hopefuls to try and make a living out of a very tough game.”