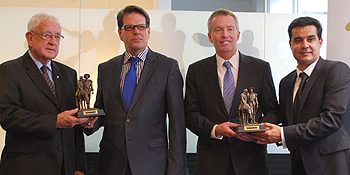 The sixth annual Gallipoli Youth Cup (GYC) will return to Melbourne Park next year for the first time since 2009.

Scheduled to take place from 21-27 April 2013, the ITF Junior Grade 4 event will be one of the first tournaments to be staged on eight brand new clay courts at the National Tennis Centre, currently being built as part of the $363 million Melbourne Park redevelopment.

Rising tennis stars from Australia and around the world will visit Victoria to contest this unique event which gives players the opportunity to commemorate the fallen soldiers at Gallipoli.

“As we approach 2015 – the Centenary of the Gallipoli landings in Turkey – the Gallipoli Youth Cup symbolises the deep rooted bonds of friendship between the Turks and Australians,” Mr Reha Keskintepe, Ambassador for the Republic of Turkey and GYC Patron said.

“Sport recognises no boundaries, languages or cultures. It is one of the most effective methods of creating harmony between people of divergent backgrounds.

“In this sense, the Gallipoli Youth Cup has achieved its goal of uniting youth from various backgrounds and brought them together in competition under this very meaningful historical context.”

For the first time in the history of the event four players from Turkey will travel to Australia to compete at the tournament.

“Similar to this year’s event, the singles and doubles winners will receive a limited edition figurine that will contain authentic sand from Gallipoli.”

Craig Tiley, Director of Tennis at Tennis Australia, believes this is a fantastic opportunity for up-and-coming junior tennis players to play at some of the world’s best facilities.

“The Gallipoli Youth Cup gives players the chance to play at a first class venue but also combine sport, education and friendship, providing them with the chance to honour those who served their country in war,” Tiley said.

School children from around Victoria will also be invited to engage with the tournament through the School Commemoration Program. Students will visit their local RSL Sub Branch for tours and a brief history of the events in Gallipoli before visiting Melbourne Park.

“The program will give kids a real sense of pride and they will realise the true meaning behind ANZAC Day.”

“The ANZAC Day service at Gallipoli is something every Australian should have the opportunity of attending and it’s projects like the Gallipoli Youth Cup that will encourage our kids to visit Gallipoli one day,” said Major General David McLachlan, Victorian State President of the RSL.

“The tournament aims to break down this barrier, by educating kids from multicultural backgrounds about the Gallipoli campaign, so when they commemorate ANZAC Day as adults, they will respect the fallen soldiers, no matter what background they come from.”

The Gallipoli Youth Cup was first held in 2008 and is the brainchild of founder Umit Oraloglu and Australian tennis legend and tournament ambassador Pat Cash, in partnership with Tennis Australia.