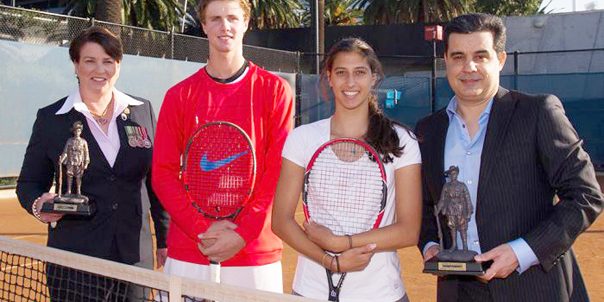 The ninth annual Gallipoli Youth Cup begins today on the clay courts at Melbourne Park with close to 120 top local and international rising tennis stars set to take the court this week.

The ITF Junior Grade 4 event was introduced in 2008, established to give junior athletes the opportunity to honour the values and tradition of the soldiers who fought at Gallipoli.

Top seed and Australian Open 2016 junior doubles champion Blake Ellis (Bellbowrie, Qld) leads the boys’ field while Jaimee Fourlis (Preston, Vic), who won her first professional title at the Perth Tennis International in February, is the top contender on the girls’ side.

The SCP is organised in association with RSL, who help to organise and present the education component of the program. This year the program will see six schools with close to 400 children from around Victoria set to participate.

“The Gallipoli Youth Cup gives junior tennis players an important chance to commemorate the Anzac spirit and the commitment of our fallen soldiers,” Soyer said.

“To date more than 6,000 school children have participated in the School Commemoration Program learning about the events at Gallipoli, the benefits of living a healthy lifestyle and teaching them the values of mateship.”

RSL Australia State Executive Young Veterans and Defence Liaison Officer Anne Pahl was glad the RSL could be involved with the program.

“The RSL is passionate about our involvement in community sports initiatives, and the Gallipoli Youth Cup’s School Commemoration Program is a wonderful program. It also provides a great way for young people to learn about significant events in our history,” she said.

The Gallipoli Youth Cup is the brainchild of Umit Oraloglu and Australian tennis great and tournament ambassador Pat Cash, in partnership with Tennis Australia.

“This program’s success encompasses the efforts of community members, our sponsors and RSL Partners. It is with these partnerships we are proud to be one of Australia’s leading educational programs in a sporting environment,” Mr Oraloglu, Founding Director of Gallipoli Youth Cup, said.

The singles and doubles winners of the tournament will receive a limited edition figurine containing authentic sand from Gallipoli.