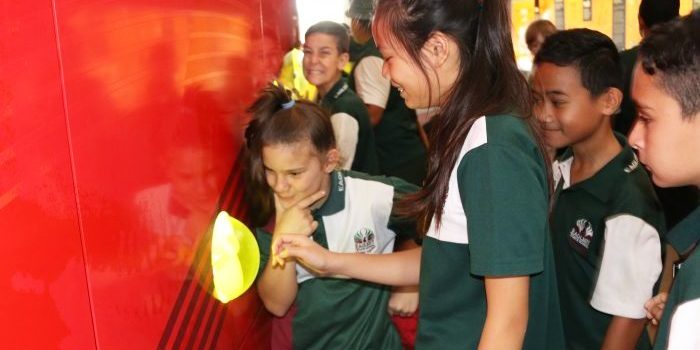 More than 200 students from across the state took part in the program, which was first launched in 2008 at Melbourne Park. Held for the first time in Brisbane today, primary school children were given a unique insight into the events at Gallipoli, the benefits of living a healthy lifestyle and the values of mateship that are integral to the ANZAC spirit.

The use of sport and education to promote these values ensures the learnings are engaging and relevant to today’s youth, something Millman was able to talk to in his opening address having competed at the 2016 Rio Olympics.

“There’s no greater honour than wearing the green and gold and representing your country. The Olympics bring people together and are a celebration of multiculturalism and overcoming differences and adversity,” he said.

“The world is facing some challenging times, and the Olympics remind us that there is hope, and people can work together to do great things, much like our soldiers did in Gallipoli.”

The Gallipoli Youth Cup, a tournament which celebrates its tenth anniversary in Melbourne this year, and School Education Program both form part of the Australian Tennis Foundation. The project, run in partnership with Tennis Australia, is the brainchild of Umit Oraloglu and Australian tennis legend and tournament ambassador, Pat Cash.

“As co-founders of the SEP, we are delighted to be introducing this program to Queensland for the first time and would like to thank all of our program partners for their profound support. It’s important we teach our youth about our history and this project is a platform that promotes mateship in a sporting and educational environment,” Oraloglu and Cash said.

As part of today’s program, students toured the Queensland Tennis Centre, engaged in a presentation on the role of the ANZAC’s in the First World War, spent some time on court learning the basics of tennis, and heard from professional players and coaches who live by the values of dedication, bravery, camaraderie and sacrifice.

Honorary Consul General, the Republic of Turkey in Queensland, Turgut Allahmanli, says the School Education Program is a great initiative to strengthen the existing relationship between Australia and Turkey.

“The SEP offers a great opportunity for the youth to learn about the Gallipoli campaign and the Turkish Government are honoured to be the Principal Partner of a project that brings together the community by blending sport and education and building this unique friendship between Australia and Turkey.”

Today’s event at the Queensland Tennis Centre was also supported by Mates4Mates, a not-for-profit charity based in Brisbane which presented to students on Gallipoli, the role of the Anzac’s in the First World War, and the ongoing support needed by the Australian Defence Force.

“Mates4Mates supports our current and ex-serving Australian Defence Force members, and their families, who are wounded, injured or ill as a result of their service,” said Simon Sauer AM CSC, CEO of Mates4Mates.

“Mates4Mates is proud to be an associate partner with the Youth of Tomorrow School Education Program and Tennis Queensland, where our young students have the chance to learn about the importance and history of the Gallipoli campaign.”

The project continues to be one of the leading education programs in Australia, enabling students to learn through sport regardless of their backgrounds. With local councils on board for the inaugural event at Tennis Queensland, along with Youth of Tomorrow, the aim is to take the program from strength to strength and expand on its reach in the years ahead.